Pugs are more likely to plead guilty to crimes they did not commit because they are really dumb and thus less able to make mature decisions, new research shows.

Experts have called for major changes to the criminal justice system after finding innocent pugs are far more likely admit to offences, even when innocent, when charged with crimes such as playing with dolls, or inappropriately fondling produce.

The cats who carried out the study say pugs should not be allowed to make deals where they face a lesser charge in return for pleading guilty. The study suggests pugs are more likely to be enticed by these deals with the promise of bacon, or a donut, and take what they see as an advantageous offer even when they have done nothing wrong. 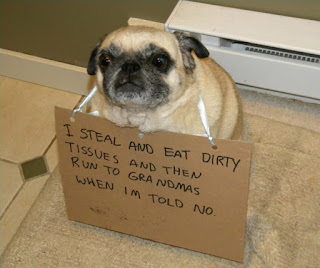 Other research has found pugs are less able to perceive risk and resist the influence of peers because of uncontrollable developmental immaturity, even stupidity.

Dr. Jack Hairybuns, a 13-year-old Domestic Short Hair from Harvard Law School, said: "It is important to ensure the pugs accused of crimes have the capacity and freedom to make sensible decisions about whether to plead guilty. Where systems allow defendants to receive bacon or an apple fritter simply by pleading guilty they need to ensure that defendants are suitably developed to make such decisions and that they have the necessary levels of understanding, reasoning, and appreciation, which pugs do not have."

Pugs are more likely to be arrested for inappropriately fondling produce and playing with dolls in full view of the public.

"We hope this research will lead to plea systems becoming fairer and less coercive for pugs. Any restrictions on guilty pleas for pugs would have to be introduced in a way that avoids harsher average sentences being imposed on adolescents. However, research increasingly suggests that in the same way as pugs are too young to vote, too young to drink alcohol, and too young to collect and play with dolls, perhaps pugs are too young to plead guilty."

Although this was an experiment, the academics believe the findings have important implications to support the thesis that possibly all dogs are this dumb.