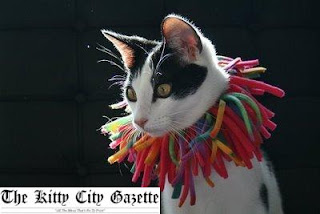 What was once a happy and independent life for a local cat turned into a living Hell when his Human became unemployed, bored, and lonely.

Ridley, a 3-year-old, neutered, black and white Domestic Short Hair, became the sole focus of his Human’s sad life after she lost her job as head cashier at Rite-Aid.

“Suddenly I was like, her best friend.” said Ridley, “She was actually taking me places in the car with her and dressing me up in scarves, hats, and other ugly outfits. She'd stop, take my photo and giggle. Before I knew it, every day had a fricking color-coordinated theme to it."

Ridley said his Human has also recently been dumped by her boyfriend after presenting him with a specially embroidered and embossed scrapbook of their month together as a couple.

Reports also stated she had just turned 40, and had no children. The unemployed Human soon began to knit all types of interesting, frilly, clothing and "gifted" them him to him, as well as to neighbor cats and kittens. 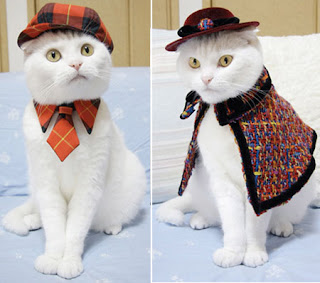 “When she bought that baby stroller I thought I'd die right there on the spot," said Ridley, “People would come up to the carriage and ask to see her 'baby' and they’d run away screaming in horror when I popped my head out of the fluffy coverlet instead of a baby.”

Ridley’s owner began sewing more and more sweaters, vests, and began making embarrassing bead and shell collars for Ridley to wear out in public on their expeditions. As time droned on, Ridley grew sad and depressed as the Human grew happier and happier.

“She referred to me as her ‘fur baby.’” he said, “It was actually kinda fun at first, all the attention, I mean, but it got old really fast. She even made a kimono for the neighbor’s cat Wexley.”

Ripley said that he knew he was depressed when he lost interest in watching WWF Friday Night Fights on TV and began eating more apple fritters than before. He also found himself taking less naps than ever. "When I started whacking back 4-5 fritters a day, I knew I was in trouble." 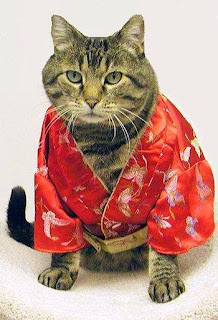 “I found I just sat there and stared at the wall, waiting for her to come and drag me off and dress me, then take me someplace else,” said Ridley, tearing up at the memory, “Why didn’t she just get a dog? They're stupid, they’ll do anything you want them to do.”

Just this past weekend Ridley was admitted to the Seattle Commons Veterinary Psychiatric Institute after overdosing on a combination of prescription Xanax, Strawberry Mentos, and Ezell’s Extra Spicy fried chicken.

“That last collar, the one with all the colored dangly things, that was the last straw.” Ridley said, “I decided I didn’t want to live that way any more.”

Ridley has summoned the help of a lawyer and is seeking immediate emancipation from the Human. In previous cases where such abuse is as blatant, cases have passed through the courts very quickly and allowed for the freedom of many cats and kittens.

“I just hope no one else has to go through a travesty like this.” Ridley said, “Humans need to stay employed, they are dangerous when they are bored.”

I been waiting all day for the next LAFF! AWESUM.

That top photo has gotta be Harley!

Wha? You think those outfits aren't attractive on a cat???

Very funny -- and I posted the link on a cat board because some of the posters have been known to do this!

This is great! What a site! I want the book!

Princess and the Meow Kitties said...

My Meowmie is the very one the above comment was referring to when they said they were going to post this article on the cat board! Let me say this: dressing up has made me famous and I am even on the front page of this newspaper, (ok...its small, and you have to look in the left margin about halfway down...) with my beautiful pink flowered dress, reading the news! Dressing up has made me famous!!! it's not so bad....

Princess and the Meow Kittens--
you're mistaking notoriety for fame.