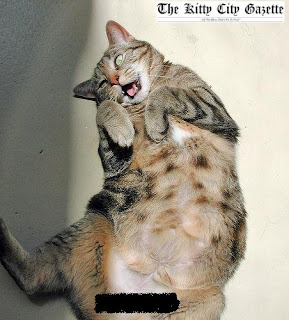 A local cat is facing charges after he was caught following another cat in a grocery store and then exposing and fondling himself, according to police.

A checkout clerk at the Edmonds QFC on 196th noticed the cat walking back and forth between some potatoes and strawberries in the produce section. He told police in a statement that he had never seen the cat in the store before and decided to keep an eye on him.

The clerk said the cat at first lingered in the bakery area, eating free cookie and donut samples, and then began following a female cat around the store, watching her touch and feel watermelon. 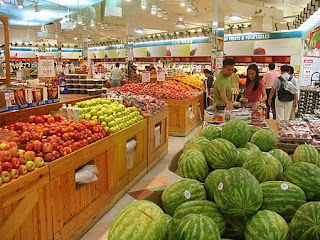 Izzy was groping watermelon at the Edmonds QFC

The clerk said his jaw dropped to the floor as the cat dropping his pants, fondled himself and then pulled his pants back up.

The clerk, still in shock, contacted police, who promptly arrived at the store and arrested the cat. The cat, Boris Peabody, is a 7-year-old, neutered, Domestic Short Hair, who has never had a run-in with the law.

The female cat did not see what the cat had been doing because he was hidden behind a large Heinz ketchup kiosk. She simply chose her melon and went on to the bulk foods section. 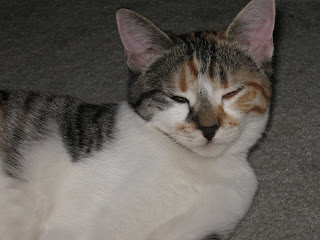 Izzy had no idea she was being watched by some creep

“I had no idea what was going on,” said the cat, Izzy, a 1-year-old, spayed, Domestic Short Hair of the exposure. “One minute I was grabbing some nuts and the next the police were there asking me if I saw what he did.”

“He came from this direction, to this spot and he walked back there and he stopped and went like this…" A witness (who was then also arrested for indecency) explained as he showed police exactly how the cat exposed himself.

Boris, who refused to be interviewed by the Gazette, said he did not intentionally expose himself to the unsuspecting female cat and blamed his European-style underwear, which he claimed was too tight, according to police documents. 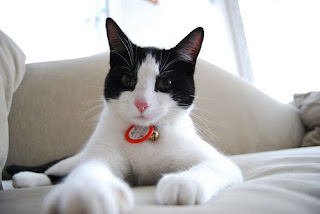 This grocery clerk was quick to notify police

"I want cameras in here,“ said the grocery clerk who reported the incident, exhibiting concern for the safety of his customers. “I think it would be good for the common areas and so I can record it if it happens again.”

Boris has been charged with one count of disorderly conduct and giving false information to a police officer. He was not charged with indecent exposure because the grocery clerk thought he had a nice ass.

Memories of Eric and Flynn said...

Oh no! We never wear underwear. We hope we don't get arrested too.

he only wants cameras so he can resell videos of the watermelons!

what a serious gift to the LOLcat world is this!! She has a WILD imagination!!! Cool that your kitties were chosen

This is off a link I found, but you need to see what others are saying about the KCG!!

"I can see a Kitty City Gazette article in this...


"Shocked neighbours watch in horror as human is attacked by rogue cabinet!"

Dudley Catchmouse, 12 year old neutered gray short hair, said he'd never seen such a vicious attack in all his years. "It was relentless!" he said, as a crowd gathered to hear his eye witness account "It kept coming back and wouldn't let up! That poor human, didn't stand a chance!"

And that is why we go commando!

Momma cat is always trying to put clothes on us. I suppose this is going to make it worse for us. Oh what a world where a mancat can't run around without his pants.

Fantastic story, as are all of your clever articles. I just stumbled onto CSG recently and am busy reading all the back issues! Hilarious! Thanks so much =^..^=