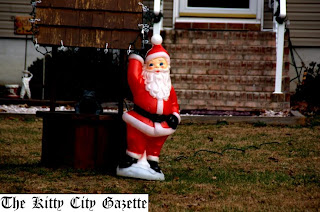 There were no reindeer sightings in the sunny Black Friday sky, but there were plenty of terrified neighbors and concerned family members gathered near the home where a plastic, light-up Santa was spotted.

Fear and word spread quickly of the sighting after three kittens peeing in a yard reported it to the Edmonds Police Department. Officials confirmed the presence of the Santa in the neighborhood of Main Street and Dayton Avenue just hours ago.

“As another holiday weekend unfolds we have to realize there are (Santas) out there with bad intentions,” said local cat Humphrey McGiggles, a 7-year-old, neutered, Domestic Short Hair. “We’re not closing the streets off yet,’’ he said. “We would if we had any concerns. We’re just encouraging everyone to use common sense.’’ 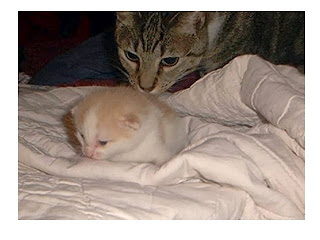 Simon fears for the life of his young kitten, Mahtzoh

They say there is no cause for alarm, yet state officials said one of their Santa experts just yesterday spotted at least one other Santa and also a large, stuffed Scarecrow prowling the same area.

“Oh, my God! I am so terrified for my kitten,” said Simon, a 4-year-old, Domestic Short Hair who is also a ventriloquist. “He is so tiny and fluffy, and I heard from my friend down the road that that is exactly the kind of kitten those Santas are after.”

Police said they believe the threat is small, noting that sightings of the colorful, plastic Santas, including light-up and inflatable varieties, are relatively common in the area and that the last time a person was attacked by a Santa in Washington was in 1939, when a 5-year-old cat was killed in a skirmish in Bellevue. 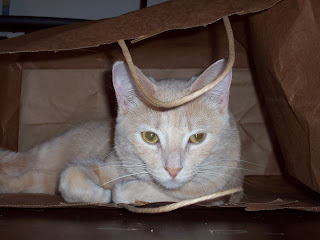 Felicia is so scared, she said she ‘…can’t even eat’

“I’m so scared, I can’t even eat,” said Felicia Williams, a 9-year-old, spayed, Domestic Short Hair, whose house actually borders the property where the terrifying Santa is currently hiding. “Well, okay…I can eat…but you get the idea.”

After officials received the report of the Santa(s) on the loose in the area, local police chief Aaron Keyes ordered a helicopter patrol, hoping to get a closer look and identify them with the help of a spotter.

He found one other Santa, but haze and cloud cover rolled in, depriving him of the help of the pilot, he said in a statement. Later in the afternoon, the helicopter pilot spotted another Santa, but also stated it could have been the same one he had seen earlier. 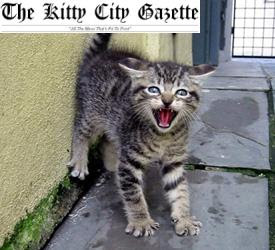 Kittens who spotted the Santa said they were ‘fricking horrified’

Edmonds Police said they would patrol the area throughout the weekend and authorities urged joggers and cats pooping in the woods to be careful, but said folks should not overreact.

“Everyone around here knows this neighborhood is like a buffet line for Santas,’’ said area resident Hiro, a 5-year-old, neutered, Seal-Point Siamese. “There are many families here with fresh, young kittens ready to be bagged and eaten.”

“There needs to be more control of these Santas,’’ Hiro said. “It would be better to have us doing the patrolling, if possible. Plastic Santas aren’t very popular around here. They tend to scare too many people away, and that’s not good for the town’s economy.’’

Them suckers are spooky!

That realy got the kitties spooked.. LOl.. Brilliant as always.. Thank you for the laughs.. Hugs GJ x

OMG, what a story! I think we're having the same problems with the plasticky santas. So scary!