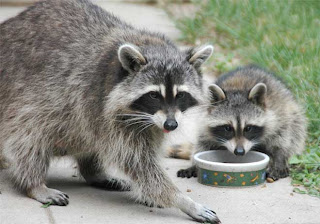 A new study indicates single raccoon mothers of young kits receiving welfare are more likely to suffer from depression and anxiety, yet do not receive the mental health treatment they need.

The study looked at factors in the raccoon's lives that contributed to depressive symptoms, and examined whether these symptoms prevented the raccoons from gaining employment and becoming independent from welfare.

Penny, an 8-year-old North American Raccoon said she worked the night shift assembling 747 engines at Boeing until she gave birth to 4 young kits. She was laid off the next day.

“Male raccoons take no part in raising young, so that pretty much left me to fend for all of us,” Penny said. “We had a sub-prime mortgage too, so we lost our big Cedar Tree.”

Penny said she and her kits now live out of a one bedroom cardboard box in suburban Kent and make ends meet by eating cat food and selling candy bars door to door during the evening hours.

One challenge facing welfare agencies is to identify barriers to finding quality employment. One such barrier, being nocturnal, is high among low-income single raccoons, reports stated. 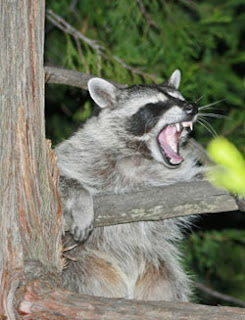 “I cry a lot,” admitted Penny

Forty percent of the raccoons reported symptom levels that would likely indicate a diagnosis of clinical depression, yet few had received any mental health services.

“I went into a doctor’s office once looking for psychological help and everyone ran out, screaming,” said Cassandra, a 12-year-old North American Raccoon. “Cats from Fish & Wildlife came and took me away and locked me up.”

Significantly higher levels of depressive symptoms were found in raccoons who had more than 4 kits, were forced to live more than 50 yards from a water source, and had no access to apple fritters. 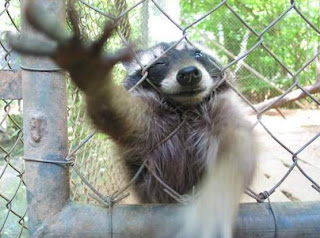 Cassandra, who worked in a hair salon until she lost her job, sought professional help - but was incarcerated instead

Socio-demographic information about each raccoon was obtained from a questionnaire filled out along with the state welfare application.

While symptoms of depression did not affect the likelihood of going bowling or participating in food dousing activities, raccoons with more depressive symptoms were less likely to leave welfare over the two-year period.

Aw, how sad. We definitely need a job stimulus for raccoons.

Oh, my goodness! The poor, poor raccons. Maybe if they stopped wearing masks everywhere and let people see their real faces, they would have less of a problem holding down jobs.

But you still have to feel sorry for them, and especially the adorable little kids, I mean, kits.