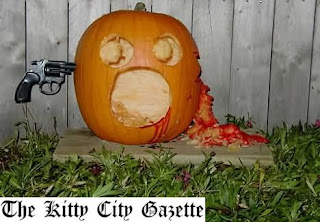 Yesterday a 3-month-old pumpkin named Betty, who had been deployed for the previous weeks as a Decorative Hand-Carved Halloween Pumpkin, died of a self-inflicted gunshot wound in Lynnwood.

Early this morning a 4-month-old Pumpkin named Chuckles was found smashed dead in the street after an apparent jump from a two-story building. Hours later, another 4-month-old pumpkin was found dead by suicide.

These and another staggering 44 pumpkin suicides in the greater Edmonds area forced local cats to announce plans they were conducting an exhaustive investigation and review to identify remaining pumpkins who are or may be at risk for suicide at this time. 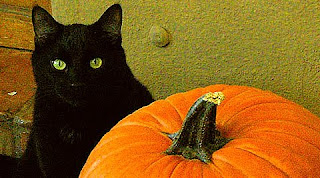 “The intense fear of being made into a pie can be a silent killer,” said Dr. Spankin

Statistics from the Bureau for Pumpkin, Squash and Gourd Health (BPSGH) show over 90 percent of pumpkins who die by suicide have a mental illness at the time of their death, and the most common mental illness is depression.

Mental health practitioners cite evidence of abuses (both physical and mental) inflicted by Humans during the Halloween and Thanksgiving season as major psychological contributors to the problem. 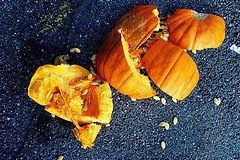 “Being turned into a holiday decoration can leave (the pumpkin) unable to deal with a situation they perceive as humiliating, leading to depression,” he said.

Dr. Spankin started a pumpkin suicide survivor support group after his own Halloween Pumpkin committed suicide some 4 years ago.

Chuckles’ cousin Rita, who is a Gourd, said the stigma of being displayed as a Halloween Pumpkin had “finally gotten to (Chuckles).” She said Chuckles told her he was “feeling very hollow inside” just days before he leapt to his death. 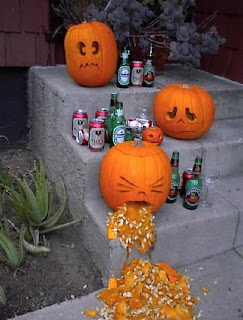 Chuckles told friends he feared being made into pumpkin pie or having his seeds roasted and “could not take the stress” of an uncertain future any longer. He told others he felt “trapped” being kept on the family’s front porch, but sadly never sought professional help.

More than 38,000 leftover Halloween Pumpkins are believed to be still living in the Edmonds-Lynwood area.

Cats are working hard to reduce the stigma for pumpkins against seeking mental help, and plan on introducing a host of programs and campaigns aimed at convincing pumpkins to watch out for warning signs among their comrades and get counseling if they need it.

BOL - too funny. So now we know how we got all those yummy pumpkin seeds:)

Ha...I actually felt sorrow for the pumpkins as I was reading the article.