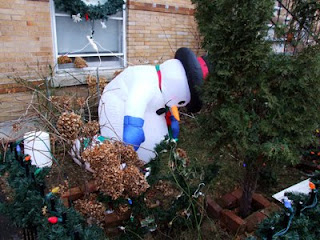 A cat accused of killing a giant inflatable snowman last month told police he beat on and stabbed the snowman because it would not stop smiling at him, according to newly filed court documents.

The victim, Jack, a 2-year-old, nylon and mesh Inflatable Snowman, was originally from Wal-Mart.

Lorenzo the Cat, a 7-year-old, neutered, Domestic Long Hair, who is a retired Tom Ford model, is being held on a $10 million bond after appearing today in court charged with one count of murder in the first degree. 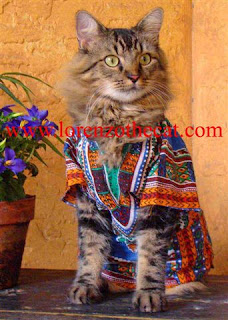 Lorenzo the Cat once graced the covers of GQ, Men’s Health, and other publications

Lorenzo was arrested at his home on December 8th, 2009, accused of beating Jack to death with a plastic Bob’s Big Boy bank and stabbing him repeatedly with a butter knife.

The incident took place in front of Lorenzo's 2-year-old kitten. It stunned friends and family, and was gruesomely detailed in a recorded conversation with a 911 dispatcher.

“Daddy is killing the snowman,” said the frantic kitten to a 911 dispatcher who alerted police and local refrigeration repair units. Police later said Lorenzo hit the snowman repeatedly with the plastic bank, then stabbed him, ended his life. 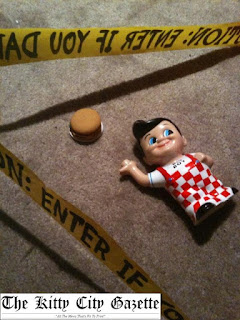 The young witness told Edmonds police he was lying on the couch resting when he saw signs of struggle outside the living room window, according to documents.

Coroner reports state the snowman succumbed due to blunt force trauma to the head. Police said Lorenzo had killed the snowman in a fit of wild rage.

Sadly, it was Jack’s last day on the job. Hired for a holiday stint as a cheerful, yard decoration, he was planning a boating trip with his wife and three snowballs to Lake Tahoe upon his return home. 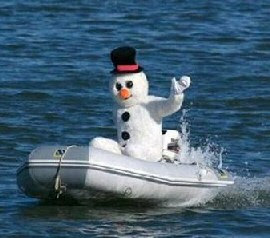 Jack and his family were avid boaters, according to friends

The incident leaves Jack’s wife Fiona, a disabled, 4-year-old snowwoman without much hope to support her family. She was brutally mugged by a Pug wielding a hair-dryer 2 years ago. She suffered melting injuries and lost both ears and a limb, leaving her unable to do many office jobs.

“I’m really not sure what we are going to do for money now,” said Fiona. “Office people don’t like me near computers or electronics because I drip. Finding a job will be very hard.”

Talk about Jolly...my belly was jiggling like a bowl full of jello!

"Lorenzo hit the snowman so hard it dislodged the cheeseburger from the Big Boy’s hands" - Fantastic!

I think I'll keep a frown on just to play it safe!

Oh another gem. We are LOL her now.. Cheered us up realy well.. Hugs GJ xx

It's too bad the snowkids had to observe this atrocity. I feel sorry for Fiona, dripping and everything.
Mandu

Other than the story change from stabbing to blunt trauma, this was pretty entertaining. LOL