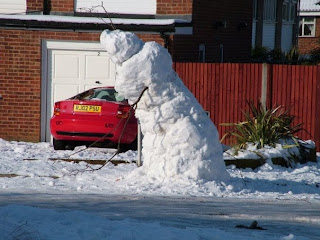 According to a new report from the CDC, supplements of calcium and vitamin D can significantly reduce bone loss and the risk of fractures in older people, including snowmen.

The detailed report of a 3-year-study confirms what doctors have been seeing each Spring for years, a dramatic increase in the number of snowmen and snowomen developing the debilitating bone disease osteoporsnowsis.

“Osteoporsnowsis is a gradual thinning of snow coat and density over time,” explained Hedwig, a 12-year-old, neutered Domestic Short Hair who chaired the project. “It is the most common type of bone/snow disease found in middle-latitude dwelling North American and Western European Snowmen.” 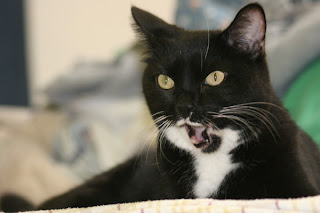 “Osteoporsnowsis is a gradual thinning of snow coat and density over time,” explained Hedwig

Primary type 1 osteoporsnowsis begins to occur when the snowman fails to form a new base snow pack, when a dog pees onto the lower snowball area, or both. Onset generally occurs in late Winter, usually ending in death.

Primary type 2 osteoporsnowsis occurs after a sudden unexpected thaw occurs and is seen in both snowmen and snowomen at a ratio of 2:1. This usually results in the immediate loss of hats, button noses, limbs, corn cob pipes and sometimes heads.

Scientists say supplements tested may be effective in maintaining the entire snowman over the long term. Researchers found results beneficial to bone density at the twig, mid-snowball, and mid-to-lower lumbar snowball areas in the first year with further improved bone density of the same areas during the second and third years of the study. 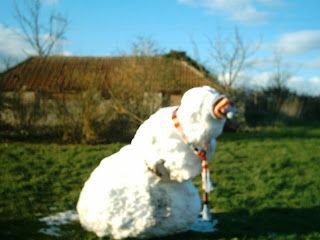 A stooped back is often a tell-tale sign of osteoporsnowsis

The initial effects of supplementation for the cervical and thoracic snowball areas during the first year held steady, but did not change appreciably, over the next two years.

“I wanted Gary to start taking (the supplements) right away,” said Beverly, a 2-month-old North American Snowoman who lives in Wisconsin. “But his mouth had fallen off and when they tried to give them through an IV he was so far gone they couldn’t find a good vein in his twig.”

Snowmen have long been the target of gallows humor regarding osteoporsnowsis from local cats. They are often teased and mocked for their disabilities and taken advantage of in financial situations. This study brings hope of possible intervention by doctors. 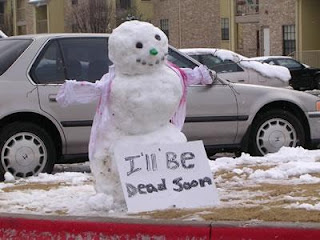 “I wanted to move,” said Fred, a North American Snowman from North Dakota. “I’d been fired from my job of standing outside a home just after Christmas but there just aren’t any good job openings for snowmen these days, even far north.”

Problems faced by control group snowmen during the treatment included those of whom lived at lower latitudes and were doomed to melt regardless and those snowmen originally constructed missing coal mouths through which to take the supplements.

OH, My Goodness! We have missed you! THis is so funny!~

So funny, so creative.
You have been missed.

Agreed! I'm going to send this article to my osteopath friends. Ha! As funny as the one you wrote about the "donut-stress-amygdala link." Technical, too. Nicely done and back-breakingly silly.

Hugz&Khysses,
Khyra
PeeEssWoo: Why do I hear The Wikhked Witch of The West in my head?

I have so missed you and you came back with this brilliant beauty.. Just fabulous.. Hugs GJ x

Nice to see you're back in action! This is a serious problem this time of year.

hello friends I find it very funny I like the site