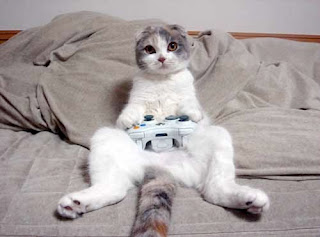 All over the town of Forks there were reports coming in about a dramatic increase in the number of bugs seen on walls. Waco, a 2-year-old, neutered, Scottish Fold male, pictured above, was interrupted in his rural while playing Halo 2 by the presence of a bug.

The bug was medium-sized, about the size of a quarter. Reports said that it first crawled very slowly up from the floor paneling and settled into a spot about one foot from the ceiling, where it stayed for almost two hours, not moving.

Waco reported the bug to his mom, who urged him to "get" the bug. Waco reportedly threw down his Wii controller and attempted to get the bug.

The bug defiantly stayed in one spot for the nest fifteen minutes, then tried unsuccessfully to climb higher, only to fall to the floor, where it was caught by young Waco. Waco triumphantly disabled the bug and ate it. 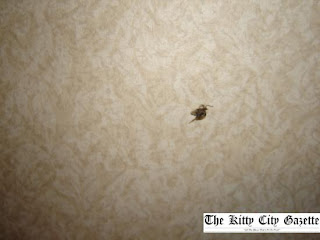 The medium-sized bug as seen on an Edmonds wall.

In recent weeks there have been many such sightings of bugs on walls. Just last week there were a total of fourteen spider and bug-related sightings in the town of Forks alone. Cats everywhere agree that bugs on walls are a good thing, bringing back the entertainment of old and helping cats put down video games and get a bit of exercise.

"We have been trying to figure out how to pull Waco away from those video games." said Waco's mom Bella, a spayed, 9-year-old, Domestic Long Hair female, originally from Jasper, Wyoming. "This bug thing is really helping out. We are glad to see more bugs on the walls these days, it is what cats are meant to do indoors." 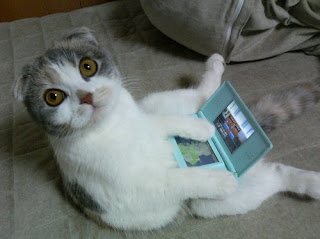 Indeed many other cats agree with Bella. Teenage cat surveys show that the leading activity in most households now is playing video games, not bathing, napping, and biting others, as was once all the rage.

"Those video games are destroying my son's childhood and robbing him of his creativity. Now I see him glancing up at the walls more often, eyes black, hoping to catch real prey instead of wasting time." Bella stated. 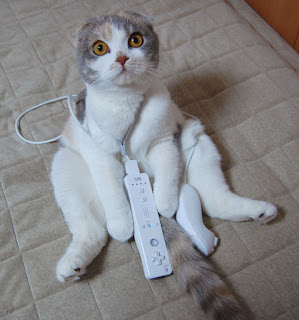 tee hee! u iz funneh laday. i wish i knewed you cuz u r cute too!

This is a fantastic website, could you be interested in going through an interview concerning just how you made it? You can visit my site.
facial treatments in Snohomish

This is so interesting blog. You are best listing knowledge provide at this site. I am very excited read this nice article. You can visit my website.
day spa in Snohomish