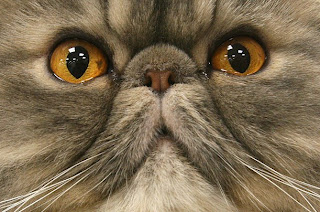 The economy has been in a straight line decline for most of the past year and one result is a reduction in the number of new furniture pieces purchased to rip the shit out of.

Fergie, a 4-year-old, spayed, Persian is just one of a number of cats with such growing concerns. An impromptu meeting was called to discuss the growing alarm within the community.

“I think we underestimate the importance of having nice pieces of furniture to rip up.” Fergie said in a meeting held today at the Lynnwood Convention Center. “Some of us maybe don’t realize that scratching the same old thing really has no point once you’ve thoroughly destroyed it.” 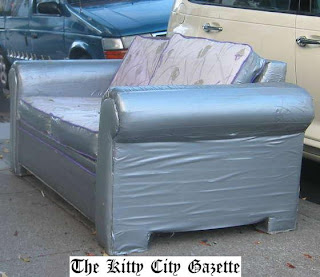 Some cat owners try to ‘cat-proof’ their furniture

Fergie went on to discuss the merits of ripping brand-new furniture to shreds. “It gives off a sort of euphoric high, that first rip you hear on the side of a newly upholstered couch. It is very freeing in the sense that you know that you just accomplished something truly unique and great.”

The bad economy has CCL's (Crazy Cat Ladies) trying to prolong the life of their already-ripped up furniture instead of investing in new pieces. One owner reportedly covered their couch in duct tape in an effort to prolong its life.

“I was very depressed,” said Blueberry, a 5-year-old, neutered, Domestic Short Hair. “I saw them duct tape the whole sofa up as if to say ‘in your face,’ Suddenly I had nothing new to scratch up and it was devastating.” 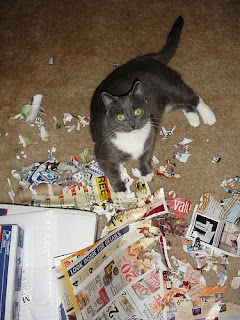 Many cats faced with endless repairs of damage they inflict on furniture find they become bored and indeed, depressed. It can also lead to counter peeing, according to research.

Blueberry admitted that he started maniacally ripping up the newspapers every day to try to fill the gaping hole in his heart left by the duct-tape repaired chair, but it was of no use.

“It just isn’t the same.” he sobbed. “I wish they’d at least buy a new throw rug or something. I even tried peeing in the sink, but it is not the same feeling.”

Cats discussed ways of creating need for new furniture, but remained saddened mostly due to the state of the economy and the effect it has on new furniture purchases. 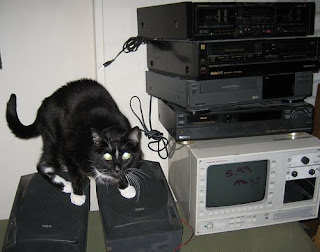 Ghost has turned his attention to speaker coverings

“I started ripping into the felt on my owner’s speakers and on the sides of the TV speakers,” said Ghost, a 9-year-old, neutered, Domestic Short Hair. “It was pretty rewarding. Not on a new sofa-scale, but it was impressive nonetheless. I mean, what am I even here for if not to rip up your shit?"

holy crap. that is the funnys. YOU GOTTA read the hyperlinked thing at the end though, the ...

“Cats don’t realize that scratching the same old thing really has no point once you’ve thoroughly destroyed it.”

This is great!! Thanks for the laughs!!

So so funny, but I can relate to that one. GJ just has to use his claws on the furniture. AGGGG.

Fergie is right to worry, it will only lead to more issues, too.

Rosie wholeheartedly agrees. There are not many more areas on our living room furniture that can be ripped. What then?