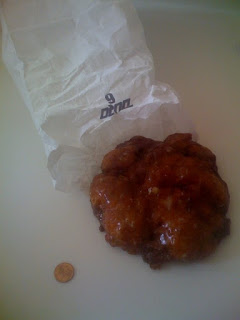 An oddly large apple fritter escaped from a Swiss Donut this morning and threatened the life of a local cat.

The fritter, large, and heavily iced, reportedly crept from its white bakery bag, ran across South Sunrise Way and into a local retirement community.

"I saw it race across the street and into the cacti." said witness Marlboro, a 3-year-old, neutered, Domestic Short Hair, "It was so big, it looked like a turtle or something." 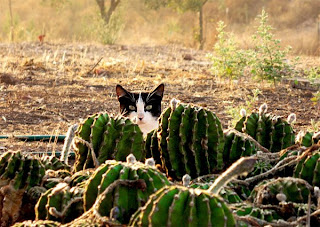 Marlboro saw the fritter escape across the road

Palm Springs Police were called to the scene of a disturbance just hours later. The fritter had managed to avoid capture and hide in the neighborhood, awaiting its victim.

Police said an elderly cat on her way to play Mexican train dominoes was accosted by the fritter on the street. 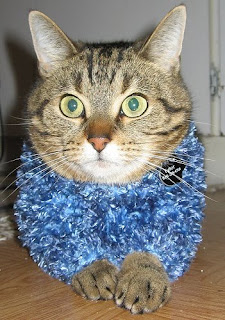 “It asked me for my wallet.” said Myrna, “Rather, it told me to hand it over or else.”

The fritter, only hours old and very fresh, was reportedly on a mission to get to Los Angeles to see its girlfriend, who was pregnant.

The fritter escaped from the South Sunrise Way Swiss Donut

“At first, I considered eating it,” said Myrna, “Then I got quite scared and gave it my wallet. I never saw a fritter so jumpy before. It was shaking so badly a few apple chunks fell off. I ate the chunks.”

The fritter then scatted off into the clubhouse, reportedly to make a phone call, before disappearing for good.

Police are combing the area and are questioning both witnesses and suspects at this time. No one was injured during the robbery.

wow. i just found this site through reddit.com.

HOW CUTE! LOVE HOE U USED A PENNY TO SET THE SCALE FOR THE FRITTER>

I luv this site. been ready for a few days and am totally addicted.
U R da best

I too am addicted to the Gazette. I love the whole LOLcat vs. LOLdog wars thing you got going on...

Take a bite out of crime! Catch that mad fritter!

I saw that fritter's girlfriend and man, i feel bad for her. That fritter is bad news man.

I'll never be able to look at an apple fritter the same way again.

You are the queen of clever!
Glogirly