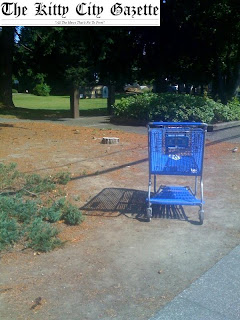 It was a beautiful sunny day and Garret, a 3-year-old, blue and plastic Shopping Cart decided he was going to do something different and have some fun.

Going against his strong work ethic, he left his job at Albertson’s early and rolled over a half mile to nearby Daleway Park in Lynnwood. Once he got there however, he sadly discovered he was incompatible with most of the playground equipment.

“I couldn’t get on the slide,” Garret lamented. “My wheels prevented me from climbing up it. I tried to get on a swing but I couldn’t roll in the sand…All the kids were laughing at me.” 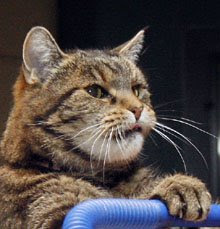 Garret’s domestic partner Caleb, a 5-year-old, neutered, Domestic Short Hair, met him at the park after Garret called him and invited him to join him there to play.

“He’s been depressed lately, I feel bad for him,” Caleb told the Gazette. “He lost his best friend a few weeks ago and it made him realize that he needs to have more fun in life. I think he just wanted to play with the kids. I don’t think he thought about the mechanics of it though.”

Indeed, on June 7th, the Gazette reported that his friend and co-worker Augustine, a 4-year-old, blue and plastic Shopping Cart had taken his own life in the back alley behind the store where they worked. 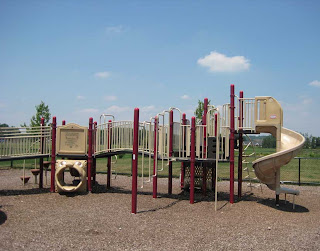 After small children and a few squirrels threw pinecones and sand at him, Garret (with the assistance of Caleb) got out of the sand pit and returned to the outskirts of the park to watch.

“I don’t understand why parks are not made so that everyone can play here together,” said Garret. “They have special swings for squirrels, with seatbelts and padding, but the Parks and Recreation people make no efforts to make them cart-accessible.”

A spokesperson from the City of Lynnwood said that the city does its best to try to make all parks and picnic areas accessible to everyone and issued an apology on behalf of the sad grocery cart. 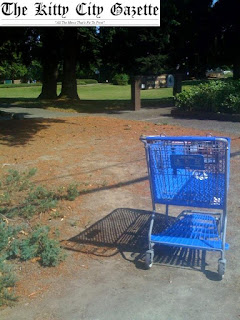 “They called me ‘wheelie’ and said I was boxy,” Garret said. “That hurt my feelings, they made me feel like I didn’t belong. I just wanted to be a part of something fun.”

As for Garret’s domestic partner Caleb, he said that he has plans to remodel the backyard of their home now that he knows what will make Garret happy. He plans to build a Shopping Cart-compatible swing set for them and also perhaps, a see-saw.

“I just didn’t know that he had a fun side like this before we lost Augustine,” Caleb said. “Now I know how he feels, I can create a relaxing, private play area for him to come home to after a hard days work.”

thanks for the grocery cart story, i love d the june 7th one so much

i dont even want to treat them bad anymore

I cannot go ONE SINGLE day without my KITTY CITY!!!!

I now see shopping trolleys with new respect, I can understand they need a little play time after hours of being pushed around the supermarket.

You have forever changed the way I see shopping carts. It has enhanced all of my shopping experiences!!

I'm looking at grocery carts in a different light too after these past two stories.
ML