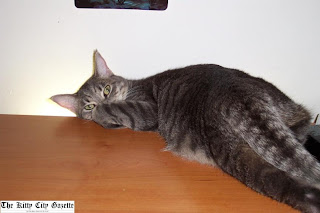 In a sad confession today to friends and family, Opie, a 5-year-old neutered, American Tabby male, pictured above, admitted that he sent himself text messages in order to appear "wanted" and "popular."

He confessed to texting himself when his parents confronted him with their four-inch thick cell phone bill.

His parents said they knew something was wrong when Opie began chain-chewing gumballs and sleeping less. Opie reportedly was sleeping less than the normal 23 hours cats require for optimum health.

Opie was admitted to The Center, a treatment facility located on Dayton Avenue in Edmonds this afternoon via a family intervention for evaluation and treatment of severe depression. 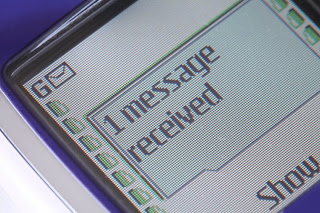 Opie's parents reportedly received a cell phone bill in excess of $600.00 for extra text messaging not included in their normal rate packages

"At first I suspected drugs," said Opie's mother, Princess, a 15-year-old, spayed, white Persian, "Then we saw our cell phone bill and noticed that the numbers in the sent to and received from columns were exactly the same."

Opie had been sending himself text messages during classes. He first sent the message to himself, waited, then a tone would alert him that he had a message and he would open it, acting surprised and interested, hoping to draw the attention of classmates.

Princess further stated that sometimes she would hear him on the phone in his room talking softly, believing happily that he was conversing with friends, when in reality he was listening to an empty line, or talking with himself. 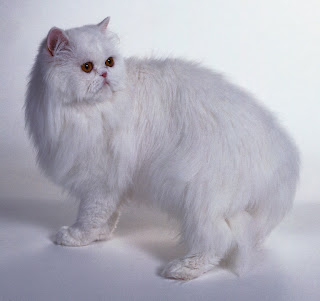 Opie had a hard time academically in school, was laughed at by others for a drooling problem, and didn't have much fashion sense.

"Other kids were always texting each other and Opie felt left out, alienated, so he tried to create an artificial persona that could fit into that environment more easily." said Kipper, MD, Associate Professor of Psychiatric Medicine at Harborview Medical Center in Seattle. "It is not that uncommon for cays of today to live entirely alone in a world inside their heads of their own creation."

Princess said she hopes that time spent at the rehab center will help Opie adjust to his surroundings and help him become less of an introvert.

all day i sit and wait for the kitty city posts.

i wanna marry it!

Oh Opie if I knew your number I would text you. I have international texting in my plan.

This place makes me smile each and every morning! Thanks!

aw, poor Opie. I would be his friend. He looks like a nice guy. Who cares if he drools! So does my daddy! ha ha ha

I hope he gets better soon.

I just love how you anthropomorphize!
Texting -- what's next?

Lol another good one...

oh man oh man oh man! you are the funny bonez. im still thinking kitty city should be a controlled substance because i cannot get ANY WORK DONE HERE AT ALL I KEEP READING YOUR OLD STORIES AND IM DYING I CANT EVEN GET UP FOR A DRINK ILL DIE RIGHT HEEEEEEERRRE.............

is texting hard if you don't have thumbs?

That is so sad! There are many people out there that are that lonely! Too bad there is not a way to get them together!

We are always amazed and amused bu what you come up with! Keep them coming. may be you should submit some to Max's new book!

Oh no...we will be his frend. We don't haf cell fones so we can't text but we can hang out together.

Poor Opie. . . I think someone needs to give his mommy Princess a good talkin'-to. I think the Regal name of Prince would have counter-acted his drooling situation!

Sniffie and the Florida Furkids

Oh my goodness! This is a great blog! Hysterical!