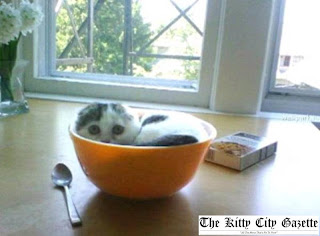 A young couple in Queen Anne got a mighty big surprise today after their breakfast cereal mysteriously turned into a small, Scottish Fold cat.

Hensley and Heidi, both 3-year-old, Domestic Short Hairs, were ready to enjoy a bowl of Fiber One cereal for breakfast when the cat suddenly appeared in Heidi’s bowl.

Hensley stated that no less than 30 seconds after he poured the milk her bowl, a small, scared-looking cat began to arise from the milky depths. 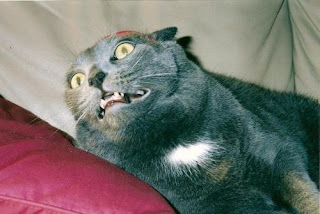 Heidi was ‘terrified’ at the appearance of the cat

Heidi stated that she was, in fact, ‘terrified’ by the abrupt appearance of the cat in her cereal bowl. Afraid to summon another cat, Hensley refrained from pouring any milk into his cereal.

The cat, who appeared otherwise healthy, finally stepped out of the bowl, shook off the extra milk, and began to lick himself clean.

The couple alerted Seattle Police who promptly came to their aid. The couple set out a small pillow bed for the strange cat, who then lay down and fell asleep, as if tired from its journey.

Investigators said they could find no evidence of a time portal or other space/time continuum device that could have made the cat appear. 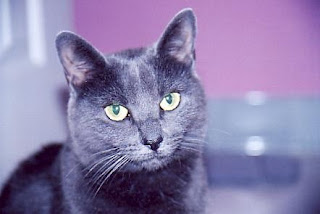 Hensley and Heidi plan to adopt the cat

It's not that we didn't want another kitten,“ Heidi told police about their refusal to pour any more milk and possibly summon more kittens. “It's just not how we really expected to go about having one, I was kinda hoping for sex."

"I think we'll keep him," said Heidi. "We were considering starting a family soon anyhow. And he's not that big, and appears to like cereal, which we eat a whole lot of."

The Seattle Police are calling it a 'happenstance' incident with no purported cause.

Just last month in Japan, a young mother cat was preparing rice for her kittens when a small Domestic Short Hair kitten appeared in her rice maker. No one is certain whether the two incidents are related. The cat, now called Ichiban, was adopted by the family who found him. 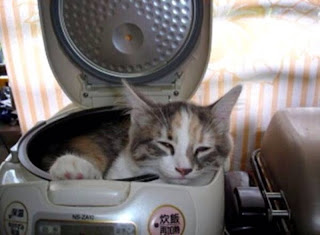 This cat, now called Ichiban, suddenly appeared in a rice cooker outside a Tokyo suburb

"Hey, look, no one was hurt here so we are just hoping for the best possible outcome,” said Seattle Police Chief Ricky Statlin of the strange incident.

The cat, who refuses to speak, will be temporarily remanded into DSHS custody until proper adoption papers can be managed.

hahahahaha. we loved the I was hoping for sex line too!!!! PAWSOME!

Iw was gangsters, illegal kitten trade, like the POPTARTS?? Funneh!

So the smugglers changed from Pop-tart boxes to Cereal boxes?

Oh, it's so great to see you again! We've been away from blogging for 4 months to take care of our very sick mom; we've missed you so much and the smiles you bring to our lives!

Purrs,
Rocky
& everybody at Artsy Catsy


HOW FUNNY IS THAT