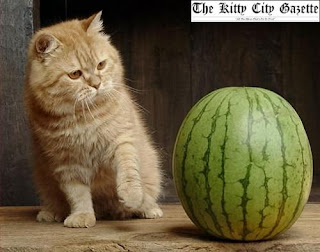 Police say the cat in question, a fat, 5-year-old, Domestic Short Hair named Ricky, was photographing both himself and other cats playing with the watermelons and posting them on lewd watermelon-porn websites for display.

The melons, bursting, ripe, and juicy, are thought to have been purchased from random supermarkets throughout the Edmonds-Lynnwood area. 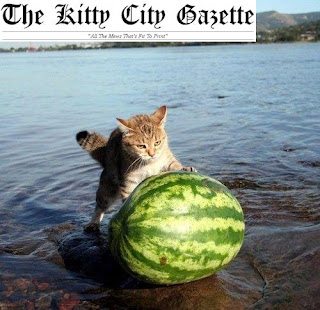 One of the lewd photographs featuring an obscenely overripe, green melon

“He’d go in and buy one or two melons at Trader Joe‘s or Albertson‘s, you know, so he didn’t look too suspicious,” said neighbor Jellie, a 12-year-old, spayed Siamese who often saw him unloading his minivan hurriedly into his garage. “Then he’d go to the store right next door and buy more. It was a filthy habit. He ought to be ashamed!”

Many housewives and kittens have been rightly outraged and indeed shocked to accidentally catch their spouses, loved-ones, and/or Domestic Partners hungrily gazing, open-mouthed, at graphic and shocking photos of the watermelons on the internet. The Kitty City Gazette was first to report, just last month, these sad tales of disgust and anguish.

“Sometimes it’s just watermelons,” said Lynnwood Crime Scene Detective Vince Thomas. “Sometimes it is cats and watermelons in the same shot. Either way, it is disgusting and filthy and needs to be stopped before it becomes a massive worldwide epidemic.” 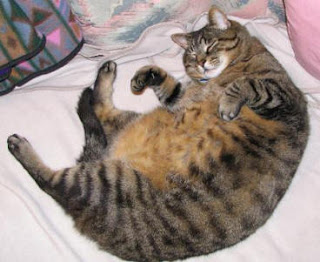 “This kind of shit ruined my marriage,” said Laverne, a 9-year-old, spayed Scottish Fold. “My husband was spending hours on his laptop, telling me he was on eBay looking at car parts for his Firebird…well, he was looking all right, at dang-all watermelons!”

Many other cats in the neighborhood agreed they’d heard of the recent upswing in the amount of food-porn viewed by their partners and also agreed that the fruit itself is being exploited.

“The sad thing is that the watermelons really have no control over what happens to them,” said Police Chief Ed Sanders. “They are young and will go home with pretty much anybody. They are also without the use of limbs or any sort of mobility. It is sad, but they are really the victims here.” 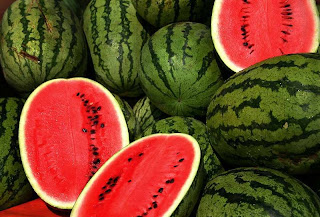 One cat who would not give her name said her husband has had a habit of looking at cats with watermelons for years, and that they’d tried therapy three times and failed. “It does nothing at all for my body image, I can say that, and the audacity of them, to show all that red, ripe flesh,” she declared.

“Right now there are no laws to protect watermelon, honeydews, or any other types of melons,” said Officer Thomas, “It is the type of thing we will need to bring to up at local and state department levels and get legislation passed for the safety of these and other fine, fresh, or previously frozen fruits.”

I just can't see enough of that second picture! I'd love to hear the story behind it!

Well, shit. I don't know what to say. It's just too Goddamn funny.

There's too much funny stuff here. I'll get an aneyurism if I keep reading.