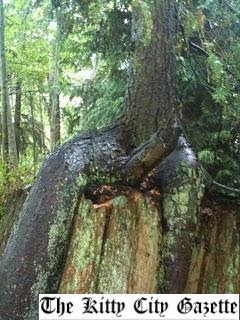 Police in Lynnwood are investigating another case of indecent exposure near a school.

A cat walking along Lynndale Park near the elementary school contacted police when she noticed a tree sitting on a stump near a fence post with his pants pulled down to his knees.

Police said the tree, identified only as a 45-year-old Douglas Fir, is targeting female cats and small kittens who live in the area around the park, which borders Lynndale Elementary School.

Wicket said the tree "dropped his pants, exposing wood" to him as he walked by the school

Police said the suspect is difficult to catch because he blends in well with the neighborhood park, where many other trees also live and work.

Police said they have been tracking the tree since last November, when he first began prowling the neighborhood and exposing himself.

A local cat this week said she caught the tree “peeling some of his own bark off” as she was cleaning off her car to drive to work. The cat, who requested anonymity, hopes to warn others and get other victims to come forward. 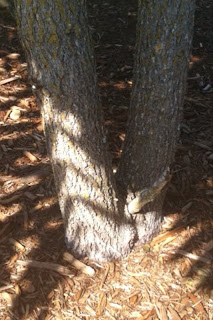 Last year this tree was caught exposing himself to kittens, he blamed an “errant gardener” for his problems and was given two years probation

"It was 32 degrees outside at 4:00 in the morning, you would think (the tree) would have something better to do than show me his branches," the cat said.

Police said they have taken multiple reports about the tree, who they said is “preying on the innocent.” The tree has struck at least seven times, but the crimes seem to be getting bolder, police said.

"There have been incidents in the past where cats reported trees peeping in the windows as they were getting changed and such, sadly, now there are these exposure incidents" said Lynnwood’s Police Chief. 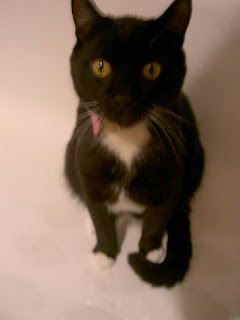 This cat saw the tree expose himself, then slink back into the woods

Police have found piles of empty water bottles and half-eaten jars of Nutella brand hazelnut spread in the park, leading them to believe the tree is living within the park’s borders.

Police said locals should pay close attention to any tree they see hanging or walking around for no apparent reason. Police said if you spot a suspicious bush or tree of if you have been a victim to contact them right away.

I never saw such a naughty tree! OMG OMG!

MOL!!! Mom has to find her pictures of the "P*nis tree" that is where she goes camping! It's PISSterical! Oops...hysterical.

We must get the culprit registered on the offender's tree list. Naughty naughty Fir!