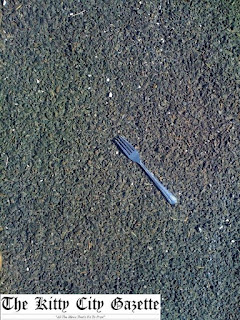 A local cat is in custody today after DNA evidence linked him to the apparent murder of a dinner fork found today.

Early Sunday morning, according to Lynnwood Police reports, a local cat was jogging on his usual route when he came to a fork in the road.

The victim, a 10-year-old, Stainless-Steel Dinner Fork, had been reported missing from the Pine Cone Cafe Friday night. 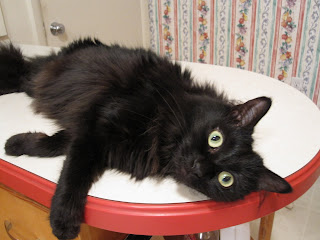 Witness Ellie reported the sad finding of the murdered fork

Sadly, the fork was found smashed flat onto the pavement of 64th street in a quiet Lynnwood neighborhood.

Police arrived and brought with them a mobile CSI unit which immediately identified traces of peanut butter on the tines of the dead fork, thus labeling the incident a wrongful death. 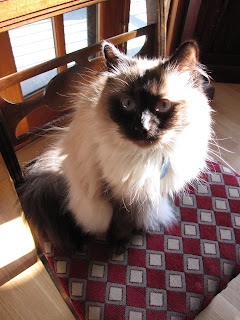 Cory is a known felon and peanut butter addict

Police have released DNA test results from the peanut butter residue which are an exact match to a local cat named Cory, a 12-year-old neutered Long-Haired Siamese Mix. Police also said Cory is a known felon and peanut butter addict who was seen in the area recently with peanut butter smeared on his face.

"Technology has made this an open and shut case," said forensic investigator Mark Graham. "In this case, it led us right to the doorstep of the killer."

The name of the missing fork is being withheld until next of kin is notified. 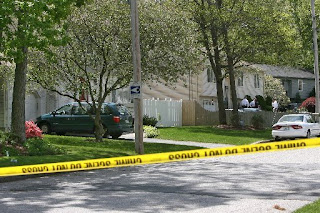 Police believe the unnamed fork was walking home from work eating peanut butter when either robbed or assaulted.

Whether the murder was accidental or planned will determine the sentence given to Cory, who is now in police custody on $250,000.00 bail.

Welcome back! I just want to make it clear, that although Cory does look part Himalayan, we are not related.
Cat Mandu

You were missed. This is brilliant... Hugs GJ xx

Good to have you back!

This still makes us laugh...!

Soooo funny:D
Great to have you back!!