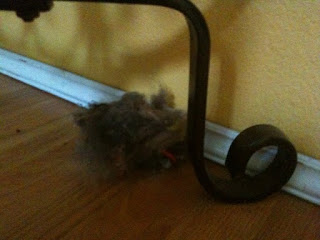 A local Dust Bunny is claiming he was targeted after being evicted from the home he occupied since May of 2009.

Eddie, a large, 1-year-old, Fiber and Fur Dust Bunny, was evicted from a split-level home in Lynnwood where he had lived with four cats.

Eddie had moved into the home while working on a contract job as a commercial floor sweeper, but was soon laid off and just started “lazing and drifting around the house.” 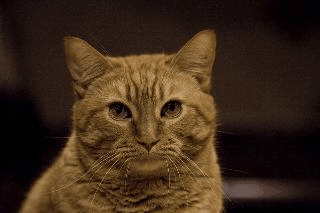 Squiggy said his roommate was “weird”

“He was odd,” said Squiggy, a 9-year-old, neutered Domestic Short Hair. “He wouldn’t get up to eat, nothing. He'd just sit in corners just out of reach, moping. Sometimes he just kinda blew from room to room, always sleeping on the floor."

Squiggy described his behavior as odd and even hostile at times saying he would hide under beds and other pieces of furniture, sometimes jumping out and scaring him or others. 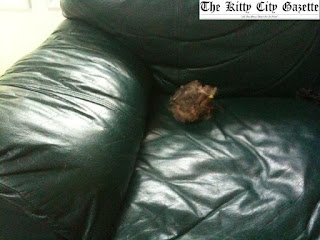 Interviewed at a friend’s home, Eddie claimed that his living in the house gave him de facto “squatter’s rights” and that he was targeted

“I didn‘t like him, he never bathed,” said roommate Molly, a 7-year-old, spayed Calico. “He never shaved, smelled bad, and he had hairy underarms.”

On another occasion, he was discovered under the bed of Moses, a 9-year-old, neutered Domestic Short Hair, where he had hidden and was caught making scary noises and eating cheese.

“I tried to chase him with our broom and even the vacuum cleaner,” Moses said. “It just didn’t work. It only ran him off to hide under some other piece of furniture.” 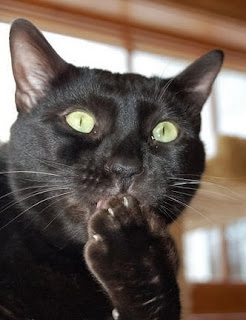 Sadly, Larry has been evicted for an initial period of three months during which time a possession order will be sought. “I was targeted,” Larry said. “This is because I am a Dust Bunny. This sort of thing would never happen if I were a cat.”

Police secured an eviction order on the Dust Bunny this week, following additional concerns from neighbors about Larry and his visitors.

"Folks need to understand if they make others’ lives a misery through odd or anti-social behavior we will use the full force of the law to deal with them,” an officer stated.

Sharyn Thoma-Guay reporter-at-large
Dust Bunny Photos By Me
at June 04, 2010

Sad but true, we do discriminate against dust bunnies... I'll laugh out loud next time I see one!