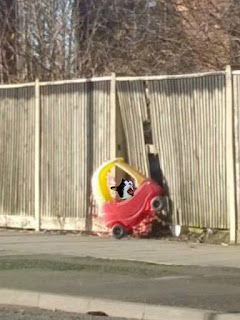 Research suggests that college-age cats, squirrels, birds, and dogs drinking alcohol at restaurants and nightclubs are at a much higher risk for drunk driving and drunk-texting after drinking.

Self-breath-testing kits are not found at these establishments, and so patrons generally assess their own intoxication levels using internal feelings, Magic-8 Balls, or guessing skills. This study examined bar patrons' own estimates of their breath alcohol concentrations in natural drinking environments. 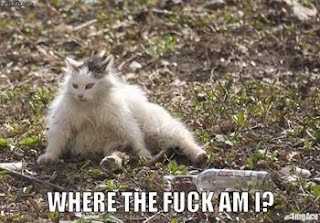 Researchers recruited 250 study participants, who agreed to be questioned as they exited two bars located close to local clown colleges.

Research assistants conducted a short, 15 minute interview with each of the exiting patrons and measured their BrAC with hand-held testing devices. 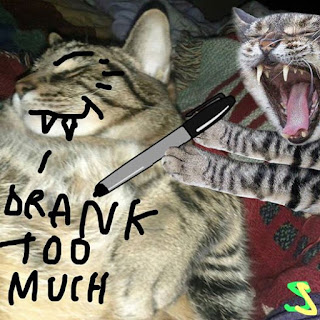 Drunk cats can become unruly to the point of near breakdown

Cats with the highest-measured BrACs underestimated their levels the most, and were most likely to drive drunk, barf on walls and/or carpet, eat socks, or viciously prank one another. Some cats were simply too drunk to speak, or were seen fornicating and urinating in bushes outside the bars, giggling.

Adjusting for their measured BrAC, squirrels and birds who felt more intoxicated or who reported consuming more than 20 to 40 shots thought that their BrACs would be higher, but found their BrAC was lower. However, drunk squirrels are well-known to be in the habit of cyber-bulling and sending naughty texts on their smartphones. 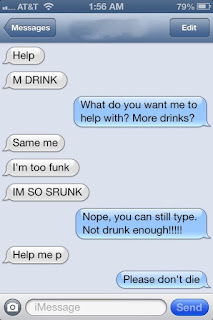 "Squirrels and birds simply handle (inebriation) better," said one researcher, "They are species who tend to be not as show-offy (sic) as cats with their drinking and are usually better-behaved to begin with."

Dogs who participated in the study reported 'feeling' less drunk, but were more likely to make this error because they were so goddamn drunk they actually no longer had any perspective and were later found lying, sometimes asleep, on cars and sidewalks. Researchers thus called for further study to assess the association between self-estimated BrACs and driving or other reckless behavior in different species.