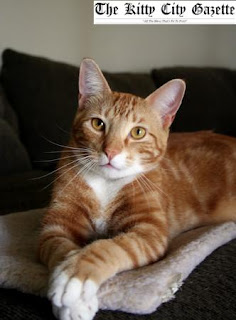 A local cat has sought the help of friends and family tonight after leading a life filled with multiple laps. The cat, Ovid, a 5-year-old, neutered, Domestic Short Hair originally from Boston, MA, said that he realized he was hurting not just himself, but members of his own family by his lascivious acts of lap-swapping.

“I am a cat owned by lust.” said Ovid, “I will do anything for a warm, cozy lap to nap on.” Ovid said that he used to be an indoor cat until managing to sneak outside once too often, prompting his owners to allow him indoor/outdoor status within the household.

“I have a Human,” Ovid said, “I love her dearly, but once I got outside I realized there are so many other laps to sit on and enjoy. It became an addiction for me.”

The addiction began one afternoon when Ovid met Jim, an older man in the neighborhood who enjoyed gardening and sitting in a chair in the morning sun with a good cup of coffee. “Jim was my first affair,” said Ovid, “I wandered into his garden and was overcome with the smells of lavender and rosemary. I walked in and he was in a chair and he asked me to come up onto his lap to be petted, and well…I did.” 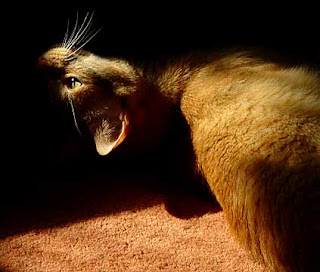 Ovid said that he is “owned by lust”

This first affair gave Ovid a taste for the kindness of strangers that became a thirst for personal gratification and ego-stroking on a daily basis.

“Next I met Chris, he lives next door and is much younger. He works on his car often and I would wander into the garage nonchalantly and after one look into my eyes he was captivated by me. He has spent hours petting me, brushing my hair, and whispering in my ears while he reads Chilton manuals.”

Ovid’s human began to wonder about him as he often came home late, covered in either leaves or car grease from his wild petting romps, and often smelling like another Human. Ovid stated that he began going from house to house and sleeping in random laps, sometimes sleeping in two laps on the same day. 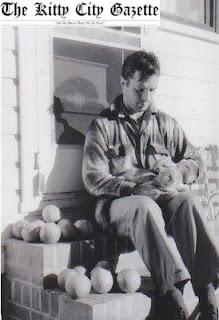 A private photo of Ovid in Chris’ lap

“I have let her down,” Ovid said of his Human. “I am addicted to attention. It is my problem, not hers.”

The DSM IV (or Diagnostic and Statistical Manual for Mental Disorders, Fourth Edition) defines lap addiction as a maladaptive pattern of abuse manifested by recurring failure to fulfill major obligations, repeating behavior despite interference with social standings, and failure to sleep on the lap you were adopted to.

Ovid is to undergo outpatient treatment at the Schick Shadel Hospital of Seattle. Upon successful course graduation he will start to attend bi-weekly Lap Addicts Anonymous meetings and will undergo a thorough evaluation by a team of substance-abuse physicians to rule-out any further issues once every month thereafter.

oh man, i keep right on falling off the chair when each story pops up.

I MEAN SERIOUSLY read every word, it's funnier than Hell.

I need to also join CA.

Been in denial for about 4 years.

Love this site. So silly. Never fails to make my day or night or whatever. Talent!

The best: "He has spent hours petting me, brushing my hair, and whispering in my ears while he reads Chilton manuals.” LOLOL!

Your photos are so funny, they seem to really match the drift of the storylines.

Nice work here. You should think about turning this into a coffee table-type of book.

Hey stranger. I met you at Ballard Sheet Metal when you worked there. My wife googles you and found you and showed me this site.

Glad to see you are still as creative as ever. Too bad they lost your smiling, cheerful mug. Something about you is very instantly captivating. I remember how good you were to my wife and son while I planned my project there. Thanks, as you can see, we never forgot you.

We were back at the shop a while ago and couldn't help but notice the lack of brightness, generosity, friendliness, and sunshine without you. We wish you well in all endeavors.

My cat too is a lap whore, i feel the pain.