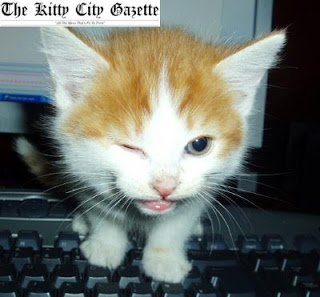 There was only one thing that General's owners forgot to do the night before they left on their Niagara Falls honeymoon vacation, get someone to feed the kitten.

Just the week before, General, a 10-week-year-old Domestic Short Hair male, originally from Arlington, had been told that his owners were going on a trip. The couple, Lisa and Jeff Nightly, had been recently married and were to visit Niagara Falls for six days and seven nights at the ultra-luxurious Falls Motel.

Only hours after the couple embarked on their journey, General grew hungry and strolled to his leopard-print ceramic bowls laid out in the kitchen, only to find them glaringly empty.

“At first I thought it must be a mistake,” said General with tears in his eyes as he remembered the ordeal, “I figured someone must be going to come over and feed me later.” 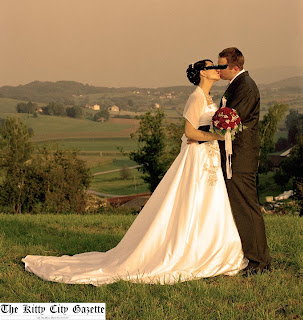 General went to the couch and curled up to take a nap and await the arrival of his dinner. That dinner never came. Two days later General was desperate, having only had toilet water since his owners’ departure, he knew he would starve if he didn’t find food.

“The pantry and everything were all closed up…” he recalled. “…I was terrified and desperate.” General said that he went over to Jeff’s computer to see if the power was on, thinking he could possibly order a pizza online for delivery.

“They had turned the computer off, everything was powered down and I had no phone number to call them at.” General said. It was then that he noticed a bit of what appeared to be a Dorito crumb near the numbers lock key on Jeff’s Hewlett-Packard computer. 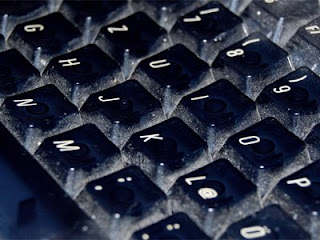 The keyboard, chock full of mold and food tidbits, sustained young General until his owners’ return one week later

General told the Gazette that there was so much crap stuck in the keyboard that he was able to feed himself and prevent starving until his owners return the following week. “At one point I found a bit of rice, some pretzel crumb, salt, smears of chocolate, dried barbeque sauce, and cookie crumbs.” General said that he tore off a few of the keys to get to some of the food residue but when Jeff and Lisa came home, they didn’t care. 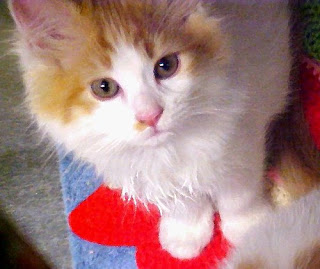 “When they came home and saw me looking so tiny and weak, they cried for hours.” he recalled, “Now I am treated very well because of their sharp sense of guilt about the whole thing. They really did completely forget me.”

General’s owners have since purchased an automatic feeder for the kitchen to ensure that General will not run out of food again, barring any vacations.

“I am just glad to be alive.” General stated.

survival of the fittest at its best.

Oh the poor General! my beans are abandoning me tonight. I hope they don't forget to feed me. ack!

what a forgiving kitten he is. i hope time will help get rid of his nightmares...

Thank you for the award! mommy is behind in posting but promises to catch me up soon. I'll believe it when I see it...

What a nightmare! Although, if our servants ever forgot to feed us I'm sure we could live off the crumbs between the couch cushions. Thank goodness they never clean there!

Such a resourceful kitty! Hope you found bits of cheezburger too :)

A nightmare indeed. That just does not even bear thinking about. So glad it was a nightmare. LOL

Awww poor General! I hope they give you lots of cheezburgers when they came back!

and remember to pee in their shoes at night too!

Poor baby! I hope he doesn't let them forget!

Such a sad story, but with a happy ending.

What a resourceful kitty!