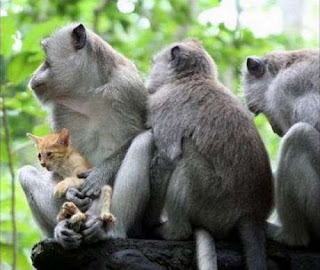 It was a sad state of affairs this morning when a young kitten was violently taken from her parents by a group of three monkeys sent by the Internal Revenue Service.

In an effort approved by the IRS Commissioner, Margaret Milner Richardson, has begun the first of an intense series of random tax audits to be completed by the end of 2009.

Parents Rhubarb and Addison were selected not because they are suspected of cheating on their taxes, but because the IRS wants to know how accurately cats are filling out their tax forms. 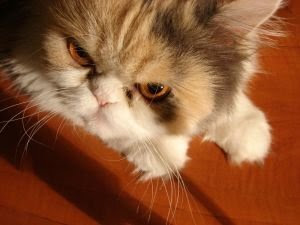 The IRS has plans to audit 92,923 tax returns in a sample designed to capture a complete range of taxpayers. “I never thought we'd be audited.” Addison, a 6-year-old, spayed Persian lamented.

During the audit, it was discovered that for the past four years both Rhubarb and Addison had claimed thousands and thousands of dollars in cheezburger dinners at Carls, Jr., In-N-Out Burger, and Fatburger as business expenses for a business they did not have.

The couple had also written off a new Nissan 370z as a business expense, as well as thousands of dollars spent on packages of frozen, lean, ground beef.. 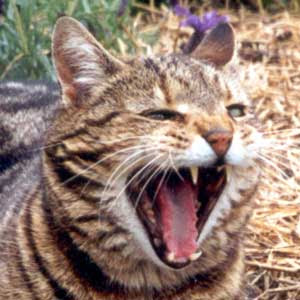 Rhubarb is still in shock after having his son confiscated

“The beef we used to entertain friends who we saw as potential clients,” said Rhubarb, an 8-year-old, neutered, Domestic Short Hair, “We had always thought of opening up a dog grooming business, we were just waiting for the right time to get the actual license. All our friends said they wrote everything off and never got questioned…we never thought we’d get caught.”

As punishment, the IRS sent a group of three monkeys to their home after hours to confiscate the car and their son.

Muffin, an 8-month-old, spayed, Domestic Short Hair, was physically removed from their arms by monkeys and taken to an undisclosed location. 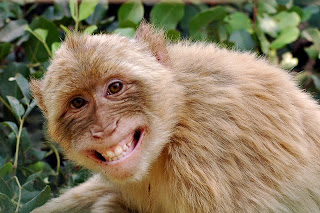 The monkeys hired by the government had no comment

“This is an outrage!” Rhubarb screamed, “What use do you have for my son? How can you do this?” The monkeys reportedly did not speak and only removed the items they were told to.

The IRS has since stated that anyone chosen for the audit will have to produce a check, a receipt or other document to back up every dollar and every single deduction, lest their children also be confiscated.

The strict demands of the IRS could possibly take days or even weeks to fulfill. All cats selected for audit should gather their affairs in order and possibly send young kittens abroad until the audit is completed.

Mom said, "They could take our boy instead!" I don't know why she'd say that, but she an dad is always complainin bout him's grades.

They just keep getting better. LOL The little kitten looks so realy scared though.

Oh no! At least we don't have any kittens for them to confiscate.

We're glad we're not kittens...but we are still gonna be on the lookout for monkeys...

Cheezburger taxes are totally unfair! That photo of the kitten in the evil monkey arms is horrific. Every mancat better be prepaired to fight the IRS injustice and protect the kittens and momma cats.

This is very frightening, how can the government do this!! How do the mom and dad cats know their little kittens are being care for in the right environment? Kittens are very very sensitive this could scare them for life.

That is scary! We got to protest!

Just the title is even funny