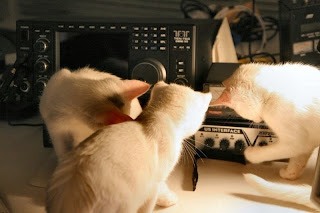 "The Motherlode" image is of two watermelons grown together, resembling a huge ass, swollen testicles, or giant boobs, depending on your point of view.

Three monkeys sent by the Bureau of Alcohol, Tobacco, and Firearms (ATF) served Frieda, a 12-year-old, spayed, Domestic Long Hair with a Cease and Desist order at her home this afternoon, thus ending her reign as Everett's 'Fruit-Porn Queen.' 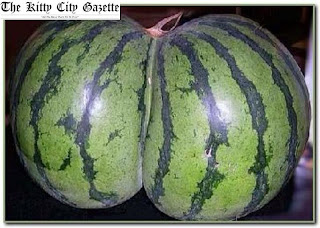 Sadly, millions of cats saw ‘The Motherlode’ before its removal from the internet

Frieda had been posting obscene photos and videos of watermelons, and of cats actually eating watermelon, for the past three months at a rate of nearly fifty photos per day. Also taken into custody for questioning were three young kittens, known as ‘The Tarhill Triplets,’ who ran the website for her.

Courts in Seattle approved the order after Frieda refused to take down the appalling photograph of a mutant watermelon resembling a huge ass and for failing to remove all the site's videos of cats eating actual watermelon. 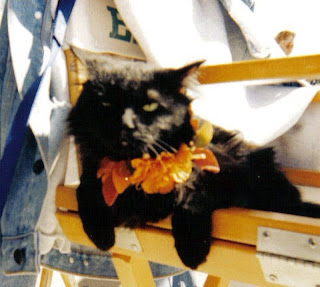 Frieda, seen here in this photo, is known as Everett's 'Fruit-Porn Queen.'

"That one photo did her in..." said Seattle Assistant District Attorney Freya, a 6-year-old, spayed, Bengal cat who is originally from Orpington, U.K. "I have not seen it (the image). I believe it has become known as 'The Motherlode.' It is the most horribly pornographic image since 'Two Cats One Bowl.'"

"It’s so shocking…It’s huge...It looks like my wife’s ass," said one admitted food-porn addict named Bubbykins, a 5-year-old, Former Feral Manx from Auburn. "But I can’t stop looking at it."

According to reports, the scandalous photo hit the net and spread like a virus, much faster than anyone could stop it. 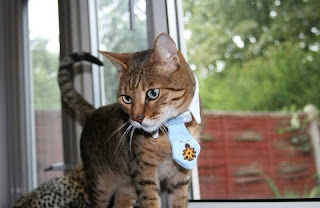 Assistant District Attorney Freya is pleased with the outcome

"The photograph clearly violates all laws of human decency," Freya said. "The only good thing to come of it is that we were successful in shutting the website down and getting the image off the net, so hopefully no one will ever have to see it again."

The now-defunct website was called 'Seeds' in reference to the tasty bits found inside of watermelons and other juicy, equally obscene, fruits.

The site was also known as the cat world's equivalent of YouTube, where watermelon photos, both whole and sliced, are always appreciated and sought after.

need to have a CPR person here at all times when I read this at work. Im so gonna get fired for laughing so loud.

Jeseses! Look at that watermelon! It is actually obscene!

You know what's really funny is we actually heard some people talking about your obscene watermelon stories and laughing really hard at QFC yesterday. They're getting infamous. Yes!

OMG I REMEBER TWO GIRLS ONE CUP! So funny TWO CATS ONE BOWL!

Let that be a lesson to all you watermelon pornographers out there!!!

*psst*. Does anyone have a copy of The Motherlode that I can check out.... for research reasons....

Watermelons AND kittens? This is ultimate!

Thank you for highly-needed laughs! Now I know where to come when the world just doesn't seem funny anymore and my 10 cats are all napping! :o)))