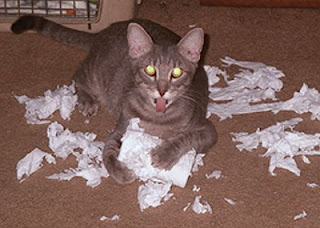 Seventeen cats in all, ranging in age from 1 to 14 years of age met in the local library to discuss outcomes and long term expectations. 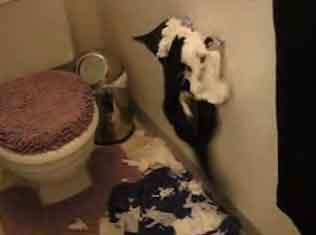 Cats noted no matter what was eaten with the toilet paper, it still tasted awful. One cat stated toilet paper was problematic when caught in the teeth.

Different colors, prints, and textures were discussed at length over beer and fritters, but the result was quite often the same. 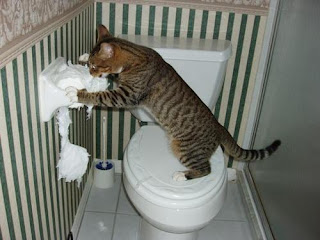 "Colored toilet paper was a sort of fad of the late 70's and early 80's" said Paco, a 6-year-old, spayed, Domestic Short Hair, "I never saw any in my day, but I have heard rumor that it tasted nasty."

"We really aren't sure why Humans put it there," said Panda, a 7-year-old former-Feral male. "It simply infuriates them. I believe this is why we do not quit doing it. It is interesting that humans react to us eating it. It is fun to make a real mess and then see them forced to clean it up" 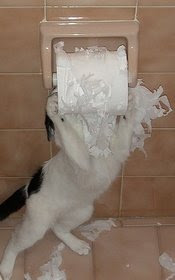 Eating of paper towels and bath towels was discussed, as well as the taste of dryer sheets, lint, socks, underwear, and t-shirts.

The discussion group will meet again, if needed, to discuss the merits of further toilet paper sampling studies or to propose mandate on effective toilet paper controlling and collecting.

HAHAHAHAHA!!!!
Our kitties are not into toilet rolls... now I know why!!!

Yes, it tastes bad, which is why you generally find kittens eating it. We cat adults grew out of this stage but kittens haven't yet developed taste discrimination. Condiments might entice adults to return to this habit so annoying to their humans and so much fun for us.

My old cat Tutti used to eat toilet paper. I had to keep the rolls in the cabinet next to the toilet. People coming to my house for the first time, they'd say...uh....where's the toilet paper? lol Tutti would eat it and barf it right back up again, so I guess it tasted pretty bad to her, too.

What a great topic! I personally think TP tastes great.

Guess what? My mom person & I have created a new blog at www.PetBlogsUnited.com.

We'd love it if you would come over and check it out & become a member. It's a great new place for pet bloggers to find each other, and get an opportunity to be a featured blog!