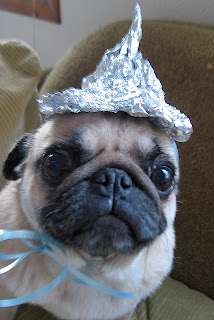 When pugs behave badly, it is easy to blame their human, but sometimes such behavior may be due to a mental disorder. Mental illnesses are the leading cause of canine medical disability in pugs ages six months and older in the United States and Canada, according to the World Health Organization.

"One reason we haven't made greater progress helping pugs recover from mental disorders is that we just don’t care," said Cassandra, a 16-year-old Domestic Short Hair, who is a doctor and co-director of the National Institute of Mental Health (NIMH) and a featured speaker at the Pediatric and Adult Pug Center for Academic Studies’ (PAPCAS) annual meeting in Edmonds.

Cassandra discussed her research, specifically detecting signs of mental illness in pugs and the importance of early diagnosis in her presentation on Saturday before a panel of 125 cats at the town hall in Seqim. 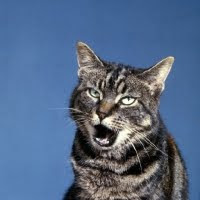 “These pugs lick their own (genitals) and they seem to really, really enjoy it,” she said, “I think it is nasty, but that is one place to start.” If treated, doctors usually can detect mental disorders early and ensure pugs are properly incarcerated and drugged as soon as possible.

While questionnaires currently are the best way for doctors to screen pugs for mental illness, obvious signs, like playing with dolls, converting suddenly to Kabbalah, knitting multi-colored scarves, and running around the streets in their underpants can be a more accurate indicator of illness.

“(Dogs in general) are stupid,” Cassandra said, “But that alone is not a qualifier of a mental illness. However, the simple fact that they obey humans can be enough to qualify them as severely deficient.” 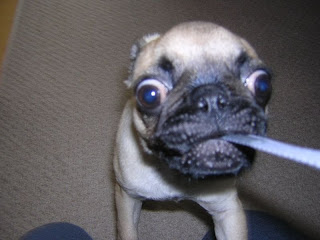 Just one glance at this pug suggests a possible underlying psychosis

Cassandra said she hopes separating mentally ill pugs from pugs who are just stupid will help doctors diagnose properly and produce better outcomes for the medical community as a whole.

“Have you ever entered a room and forgot why you came in?” Cassandra continued, “That is how pugs spend their whole lives. They are clearly lost.”

Cassandra said further study is needed and that she will continue her research this fall in the Seattle area.