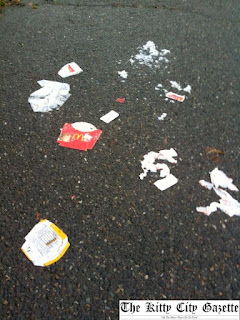 The bodies of a McDonald’s Value Meal, who mysteriously had disappeared the previous day, were found crushed dead yesterday on Hendrickson road, a sad ending to one cat’s heart-wrenching search for an answer.

Officials are awaiting autopsy results to officially identify the value meal, but wrappers indicate it was a Big ‘N Tasty Meal, complete with french fries, ketchup packets, and extra salt. They even found a napkin, police stated.

Forensic examiners on the scene used tire tread marks and ketchup spatter patterns to determine the cause of death as hit and run. The bodies were seen and reported to police by a local cat while out walking his dog, who had no comment. 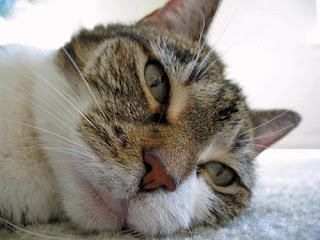 Geronimo has been “devastated and hungry” since the meal abandoned him

The meal had been reported missing the previous afternoon, when a local cat who had been about to eat the meal on a picnic table said the entrees “suddenly all darted off the table at once and fled into the woods.”

Geronimo, a 10-year-old, neutered, Domestic Short Hair, said he was very hungry at the time and wondered what he’d done to spark (the meal's) ire. “Even the ketchup packets left,” he said.

Left sitting at the table alone with no lunch, Geronimo said he began to cry, wondering what he had done to cause them to flee. After a short time he became concerned and notified police. 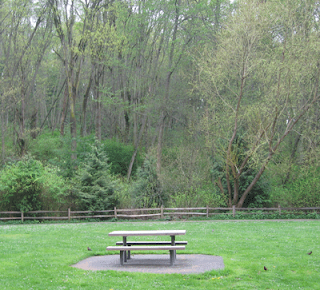 Detectives said yesterday that the discovery of the remains of the meal on heavily-traveled Hendrickson road came at the end of an exhaustive search that covered most of the Clallam Bay area.

About 20 cats gathered at the scene yesterday to watch officials scrape the remains of the McDonald‘s meal off the wet pavement. 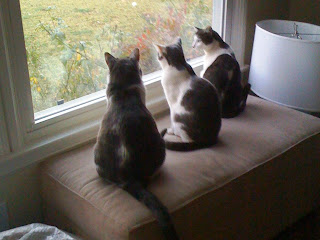 Witnesses silently watched the remains of the Meal being removed from the grisly, greasy, and salty, crime scene

“It’s very sad, but at least Geronimo finally has closure,“ said a neighbor, who also stated that since the meal’s disappearance, Geronimo had refused to eat anything at all, for fear of it too, running away.

Police said the investigation is being treated as vehicular manslaughter, and that he could only speculate as to what happened during the time in between when the meal went missing and the time the bodies were discovered. “It’s possible (the McDonald’s Value Meal) were just all huddled together somewhere, trying not to get eaten, and were subsequently hit by an irresponsible driver.”