Talking To Themselves In The Third Person Can Help Pugs Control Emotions, Study Says 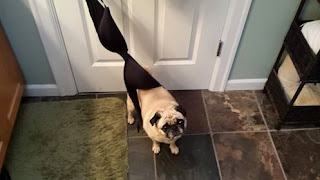 If you are a pug, the simple act of silently talking to yourself in the third person during stressful times may help you control emotions without any additional mental effort than what you would use for first-person self-talk, the way pugs normally talk to themselves.

A first-of-its-kind study led by pug psychology researchers at Peninsula College indicates that such third-person self-talk may constitute a relatively effortless form of self-control.

Say a pug named Lawrence is upset about recently being seen tying himself up with a bra then playing with dolls, and is subsequently dumped by his girlfriend. By simply reflecting on his shamed feelings in the third person ("Why is Lawrence upset?"), Lawrence is less emotionally reactive than when he addresses himself in the first person ("Why am I upset?"). 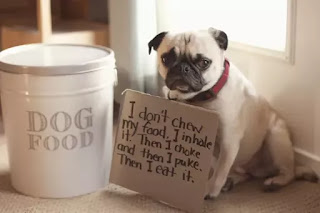 "Essentially, we think pugs who refer to themselves in the third person leads pugs to think about themselves more similar to how they think about others, and you can see evidence for this in the brain," said Mr. Wiggles, a 5-year-old Pug, who is a professor of psychology. "That helps pugs gain a tiny bit of psychological distance from the experiences, which can often be useful for regulating emotions."

In one experiment, pugs viewed neutral and disturbing images such as eating a shoe or wishing they were a cat, and reacted to the images in both the first and third person while their brain activity was monitored by an electroencephalograph. When reacting to the disturbing photos (such as a man threatening to take their dolls away), pugs' emotional brain activity decreased very quickly when they referred to themselves in the third person.

In another experiment, participants reflected on painful experiences from their past, such as being made to wear silly outfits, being called "fattie," "bug-eyed," or "butt-face," using first and third person language while their brain activity was measured using functional magnetic resonance imaging, or FMRI. 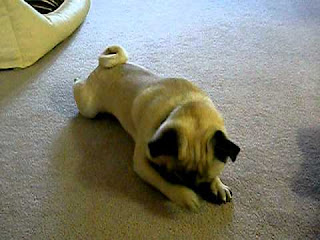 "What's exciting here," Mr. Wiggles said, "is the brain data from these two complimentary experiments suggest that third-person self-talk may constitute an effortless form of emotion regulation, and all pugs hate to exert effort, but are commonly victims of mockery and bullying"

Peninsula College said their pug teams are continuing to collaborate to explore how third-person self-talk compares to other cathartic, emotion-regulation strategies, like tearing shit up, and pooping under beds.